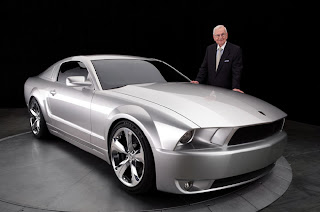 With its new sculpted body the Lee Iacocca Silver 45th Anniversary Edition Ford Mustang is one of the hottest pony cars on the market. However, as expected it's one of the most expensive too. I Legacy, the company in charge of building the car, recently announced that pricing for each of the 45 examples available will start at $89,950. That's about $10,000 more than the GT500KR or more than triple the base price of a 2010 Mustang GT. If you want items like the Ford Racing supercharger or the big brake kit, you're looking at nearly six figures. Are we surprised? If anything, we're surprised the price tag isn't more. Creating custom coachwork for a vehicle isn't cheap, especially when the cost is only spread over 45 cars.