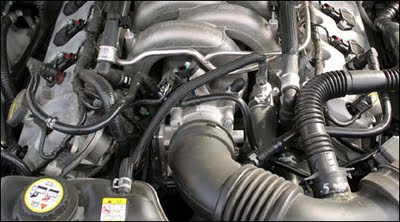 This week has been filled with yet more revelations of new technology coming to the 2011 Mustang. Namely, Ford has two new engines headed for the 2011 Mustang that are a breath of fresh metal. The revolution starts with a new 3.7 liter DOHC V6 which is rumored to power out 315hp for the base 2011 Mustang. This will put the entry level model at a higher horsepower level than many legendary and iconic “Muscle Mustangs” of the past.

This new engine has a number of technologies that get that power up including dual-overhead cams with variable valve timing. This allows infinite tuning of the cams on the fly by the engine control module. It is also rumored that direct injection is the key to that extra power above and beyond the 273hp that the 3.7 V6 puts out in Lincoln applications.

What this means is that the Mustang V6 is likely to no longer have the stigma of being the low man on the totem pole. With 315hp, the V6 would prove a credible option for enthusiasts and frugal buyers alike. If Ford sees fit to give this thing a nice dual exhaust and pair it with a 6-speed manual as they plan with the next generation V8, we have it made.

Speaking of that next generation 5.0 liter V8, there has been a lot of news and rumor about the upcoming “Coyote” engine. The engine is a completely new architecture, very compact in design, and shares little to nothing with the current “modular” V8 family. The new 5.0 liter engine will be used in both the F-Series trucks and in the Mustang for 2011. The current 4.6 and 5.4 modular V8’s are believed to be going away for both cars and trucks. The new 6.2 liter V8 will replace both the 5.4 V8 and the V-10 in the F-Series.


The new DOHC 4-valve engine appears from spy photos to feature dual variable valve timing which helps put power at or above the 400 mark. That means both intake and exhaust cams can be individually timed for optimum settings in all conditions. It might have direct injection for future applications, but prototype photos appear to show standard port injection. There have been news accounts however of the engine being tested with direct injection and turbo charging, but the first show of the new 5.0 will be naturally aspirated.

The good news is that the extra power does not come at the cost of efficiency. The new V8 will meet or exceed the current 3V V8 in mpg. This will in part be achieved by mating the engine to a 6-speed manual transmission which should make many a Mustang fan happy. The compact size of the engine itself will also leave room for modders to really get creative under the hood.

Other news on the wire this week is that the next revision of the Shelby GT-500 will use an aluminum block to save weight. What is not known is whether this will be a version of the current 5.4 liter supercharged V8 or whether Ford is going for a force-fed version of the new 5.0. In either case a substantial weight reduction for the GT-500 would go a long way to upgrading performance and handling as well as casting off its image as being shall we say “portly”.

If all of these technological dreams come to pass in the next year, the powers that be at Ford will have answered virtually every criticism of the Mustang that has existed. That is with the exception of the live axle rear suspension. While there is much debate in the press, in the enthusiast circles, and even at Ford about whether the Mustang should have a modern day rear suspension, one thing is clear. The rest of the world and even Ford has decided that an IRS is the best solution.

The Crown Victoria and Town Car are going out of production soon, leaving the Mustang as the only mainstream production car in the world with a live axle. While most Ford spokespeople and engineers we have talked to sell us on the notion that an IRS isn’t all that great or necessary, it hasn’t stopped them from installing it in every SUV they build and even one of their pick-up trucks. If you read the brochures for the Explorer, Sport-Trak, or the Expedition the benefits of IRS are extolled like virtues from heaven. Yet their own halo sports car does not need it? Something is amiss.

We have been told by Ford to look at Grand Am where Mustangs with live axles race and win against cars with IRS from companies like BMW, Porsche, and others. This may be true, but one has to remember that a smooth race track and the driving environment of public roads are two different worlds. Once off the race track we have bumps, pot holes, railroad tracks, expansion joints, and surface transitions that make that live axle dance. These conditions all remind a Mustang driver every day of that piece of 14th century design underpinning their driving experience.

The point of an IRS is not necessarily always about performance, but rewarding the driver with confidence, stability, and refinement that is expected in a modern day performance car. With the amount of power these Mustangs have today, an IRS would not only increase safety by a huge margin, but also market appeal in a world full of IRS equipped Chevy Camaros, Nissan 370Zs, Corvettes, and yes even a Hyundai Genesis Coupe. And when you consider that some high performance Mustangs are now in the $50,000-80,000 price range, it really has become the time give the horse some new legs.