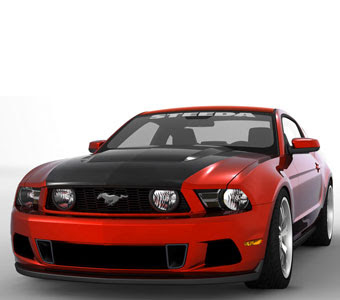 LAS VEGAS — Specific details are sparse, but Mustang customizer Steeda has announced that it will unleash its 2010 Q Series Mustang next month at the 2009 SEMA Show here. The Florida tuner showed off two images of the Q Mustang, revealing a classic-looking black-and-red pony car with a gaping front airdam.
No specifications were released, but observers are expecting extensive upgrades to the suspension and horsepower. The 2010 Q Series makes its official debut on November 3.
"In all of our Q-Series of high-performance Mustangs, we never compromise or take shortcuts," said Dario Orlando, the founder of Steeda Autosports, in a statement.
The Mustang tuner started ratcheting up its take on the 2010 Mustang in July, showing off the Sport Edition, which featured new wheels and tires, graphics and minor suspension upgrades.
Inside Line says: Steeda's take on the 2010 Mustang will be one of the must-sees at the 2009 SEMA Show. — Anita Lienert, Correspondent