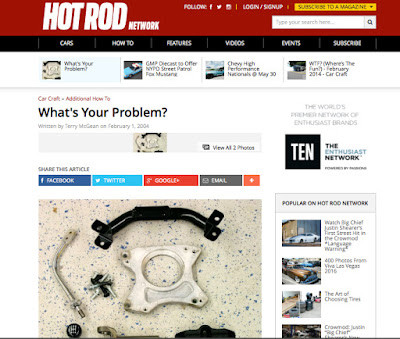 We at California Pony Cars have been thankful enough to have been featured in thousands of tech articles around the world for over the last 25 years. When it comes to tech talk, Hot Rod Magazine has always been a favorite. This tech talk article was written in back in 2004, and like our products, it's still at the top of the charts in todays day and age.

My car is due for a frontend rebuild, and Jeff Smith says one of the things he wants to put in Car Craft is more canyon-carving handling stuff instead of just drag racing (around here, it's two-lane blacktops heading into the Ozarks).

It is possible to mount a "late-model" Mustang T5 in an early Mustang, but it's not a direct bolt-in. The T5 will mate with your existing bellhousing, but only after you've made a few modifications. The easiest way to accomplish this is by using the swap kit offered by California Pony Cars (CPC) in Ontario, California. The CPC kit includes an aluminum adapter plate that mounts to the stock four-speed Top-Loader-style bellhousing, which serves to adapt the T5 gearbox as well as providing the necessary spacing to accommodate the T5's longer input shaft. The adapter plate mounts to the bellhousing using two of the existing gearbox-mounting holes; two additional holes must be created. The plate is used as a template to locate the other two holes, one of which must be tapped for threads. Since the location of the adapter plate must be precise, CPC recommends having an automotive machine shop handle the drilling and tapping of the additional holes. The plate mounts to the bellhousing using countersunk Allen-head bolts (included in the kit) so that its surface remains flush. The T5 gearbox then bolts to the plate. Since the Top Loader uses the same input-shaft spline arrangement as the T5, the same clutch can be used. The CPC kit also includes a new driveshaft yoke and the driveshaft will also have to be shortened approximately 1 inch. To bolt it all in, the CPC also includes a new transmission crossmember and transmission mount, both of which bolt right in. The final touch is a new shifter handle made to bolt to the T5 shifter but modeled after the original early-Mustang four-speed shifters, complete with faux reverse lock-out ring and stock-appearing shift knob inscribed with the T5 shift pattern.