It was on March 9th 1964 that the first Mustang rolled off the assembly line in Dearborn, Michigan. On April 17th the Mustang was released to the public an important milestone in automotive history.

A brief history of the Mustang:


Lee Iacocca had the basic idea for what would become the Mustang as early as 1960, his concept was to create a inexpensive personal car that had the flash and good looks of the first T-Birds but would seat four people, and it had to retail for the price of an economy car. He called the concept "A sports car for the masses". His first attempt was to build a T-Bird like Convertible on the Falcon Chassis, however, the small child size seats did not work with his vision of a true for passenger sports car. Ford needed something to pit against the Chevy Corvair Monza that was attracting the youth market with its bucket seats and sporty good looks. Ford was a little apprehensive to spend the money to tool up for a brand new and untested car in a relatively new segment, they still had memories of the Edsel looming in the back of the top brasses minds.
Iacocca pushed and Ford gave him his four passenger sports car. The car would fit somewhere between the popular British Imports like the MGB GT and the Ford Fairlane. The design team went to work and first turned out a radical Mustang I prototype that would would prove to be a wild promotional tool and engineering show piece with a V4 mid-engine the car looked like a early forefather to the Fiat X 1/9. While the car was very cool, it was not a 4 passenger sports car for the masses. 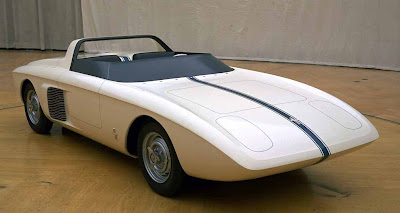 Original Mustang I
After about a year of work the studios turned out seven different clay models, the one chosen was called the Cougar and was designed by Ford Division Studios designers David Ash, Gail Halderman, and Joe Oros. The car was also called the Turino in some rendering both the Cougar and Turino name would live on in other product lines. The early project code name was another name familiar with Mustang fans "Project T-5" a name that would later be revived for some Export Mustangs. Several running prototypes of the Cougar were built including the one that would become the Mustang II show car. All of this was done in just 18 months, the car went from concept in about September 1962 to production in March 1964. 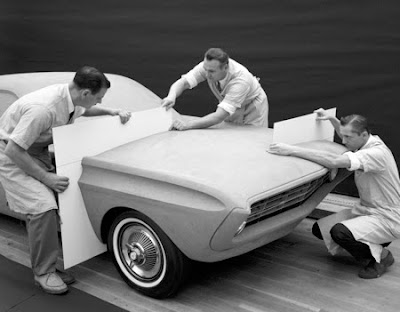 Mustang II Show Car
Ford launched a massive advertising campaign in print, television, newspapers, even Time and Newsweek ran cover stories on the New Mustang at the same time. Ford even purchased all the advertising for the 9:30-10:00 PM time slot on all three networks. This with the over 2600 newspaper ads and 24 major magazine ads was the largest and most overwhelming media introduction for a new car in history. The Mustang went on to become one of the most popular and important cars in the history of the automobile, it sparked the pony car wars and the muscle car era. Without it we may not have the Camaro, Cuda, and the GT 350 would not have been. The popularity of the Mustang has been so strong that the aftermarket today produces almost every part needed to build a new Mustang from the ground up, including complete bodies.