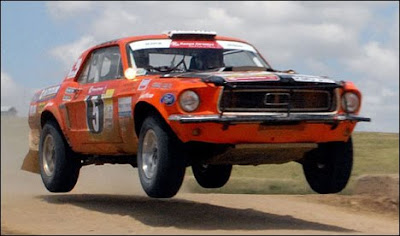 Rally races in East Africa are a little different than in other places. Watching for elephants crossing the road is a common sight, as are many of the more pedestrian cars found in that part of the world. What is does stick out is Ian Duncan’s 1968 Mustang rally car.
Former Safari Rally winner and multiple Kenya National Rally champion, Ian Duncan has entered his crowd drawing 1968 Mustang coupe again in this year’s Kenya Airways East African Safari Classic Rally which takes place November 22nd through December 1st, 2009.

Powered by a race built 400hp 302 V8 and backed up by a 4-speed manual transmission, the Mustang has a beefed up suspension, skid plates, and a host of other mods that make it survive while flying across the wilds of Kenya and Tanzania. Ian Duncan and his co-driver have campaigned the Mustang in previous rally events. In 2007 he was in 3rd when he snapped the input shaft of his transmission during the race.

Termed the “World Greatest Classic Car Rally”. The event will cover a some 2500 miles taking the Mustang through the remote and beautiful landscapes of Kenya and Tanzania. “I am really looking forward to driving the Ford Mustang which will be much better prepared since we have learnt a lot about the car in the 2007 event and also the KNRC before we started to drive the Nissan Patrol. It should give me all the things I love in rallying in one event” said Duncan.
One of the reasons a car like the classic Mustang can be the crowd pleaser of this event is because it is geared specifically for cars built before 1974. The organizers wanted to avoid the powerful turbo charged and 4WD drive cars. The stages, or sections would be longer and the service crews and back up would be limited just like in the early days. It is about nostalgia of the Safari. That is pretty cool if you think about it. Man, machine, and wild animals that are hungry for meat.