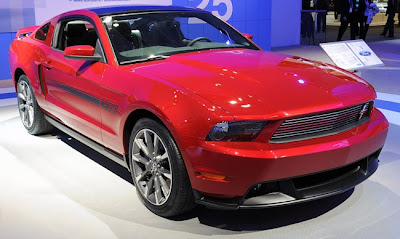 Although we have heard no official details about the new car from Ford, Autoblog spotted the 2011 Ford Mustang GT/CS California Special at the Detroit Auto Show and decided to snap a few pictures of it and give their opinion on what to expect. According to Autoblog the 2011 California Special looks to be a wheel and appearance package much like the 2007 GT/CS. It features a new larger, more aggressive looking chin spoiler that is painted semi-flat black, a polished horizontal bar style front grill, new lower rear facia with GT500 style diffuser, and taller decklid spoiler. As with the previous GT/CS the 2011 model also features its own specific wheel design, a 10 spoke version, and of course special GT/CS graphics. We don't have any specific dates but Ford should soon be releasing details and pricing on the 2011 California Special so check back soon for more info. Image courtesy of Autoblog